Waterloo, Iowa – Nearly eight full months after their last meaningful game, the Waterloo Black Hawks will return to the ice on Friday, November 6th to open the 2020/21 United States Hockey League schedule at Young Arena against the Omaha Lancers.

The USHL docket was revealed on Tuesday afternoon.  During the coming winter, the Cedar Rapids RoughRiders and Madison Capitols will be idle, leaving the league with 14 active clubs.  The Black Hawks and their counterparts will each play a 54-game slate, wrapping up during the fourth weekend in April.

“Saying that this process has been unprecedented doesn’t do justice to the experience and the efforts put in by so many people,” said Black Hawks President of Business Operations Joe Greene.  “There are many who deserve recognition, but I think it is important to add that there is still a tremendous amount of work which needs to be done.  Those activities and decisions are already underway.” 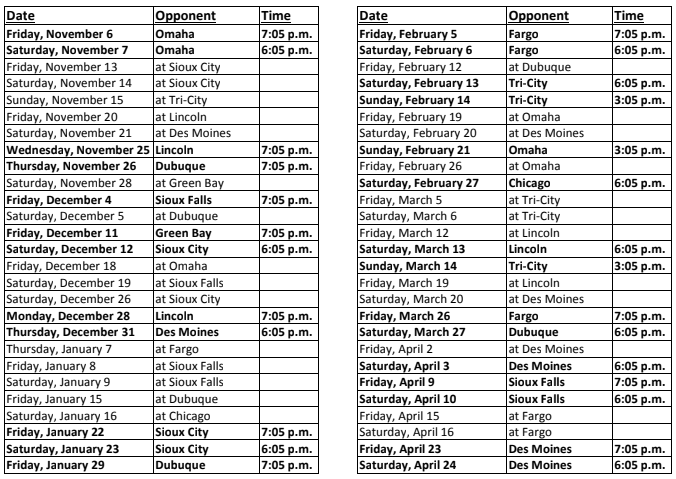 Black Hawks games at Young Arena will be played in front of fans.  However, specific details about arena capacity, seating section maps, and COVID-19 mitigation procedures are still being finalized with the Black Hawk County Health Department and the City of Waterloo.  All parties are striving to follow Centers for Disease Control and Prevention guidelines and will release specific information as soon as possible.  The Black Hawks are able to confirm – in compliance with the City of Waterloo’s mask proclamation – face coverings will be required to attend Black Hawks games.

As a result of the unsettled questions about building capacity, season ticket sales for 2020/21 have been temporarily halted.  The number of fans allowed to attend will also impact team policy related to single-game ticket sales, voucher redemptions, suite rentals and other ticket varieties, with details about those situations and circumstances to be forthcoming.  At this time, the Black Hawks request that all fans refrain from visiting the front office in person; specific questions related to season ticket accounts only will be answered as quickly as possible when emailed to [email protected].

The 2020/21 campaign opens with a two-game homestand versus the Lancers.  The next games at Young Arena will be on Wednesday, November 25th (versus the Lincoln Stars) and Thursday, November 26th (versus the Dubuque Fighting Saints) during a two-day celebration of Thanksgiving.  The 2020 season marks the 50th time Waterloo will host a home game on the holiday and the 24th consecutive year the holiday has been observed with a Hawks game.  Other home ice highlights include a New Year’s Eve game against the Des Moines Buccaneers.  It is the first home contest against the rival which will be Waterloo’s most prolific opponent in 2020/21 (the Hawks and Bucs are scheduled to meet eight times).  The Black Hawks and Buccaneers also close the year at Young Arena on Saturday, April 24th.

On Tuesday, the Black Hawks also revealed new start times for Saturday home games.  All Saturday games at Young Arena will begin at 6:05 p.m.  Sunday matchups will face off at 3:05 p.m.  As in recent years, Waterloo’s New Year’s Eve game will start at 6:05 p.m.  All other contests are slated to start at 7:05 p.m.